your life your choice!

Shout it from the rooftops

Shout it from the rooftops!

Published in PEPTalk September 2014 as Shout it from the rooftops!
By Kate Calwell

During July, our eldest son, Tim, at the age of 20 reached one of those milestones in his life that had me wanting to shout the good news from the rooftops, and I might have done that – except that I had laryngitis at the time (really!). I wondered momentarily about making some kind of announcement on Facebook, but it had been so long since I’d last logged on that I wasn’t sure I would remember my passcode! As it was, I was barely able to whisper – albeit excitedly – to every person I came across who might understand the cause for celebration: “Tim has got a job!”

For a standard child at 20 this might not seem like such a huge achievement, but for our big guy, with Down syndrome and autism – the effects of which include a severe language disorder which would have him classified as effectively non-verbal – this job is a dream come true. 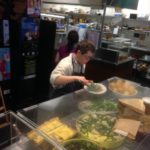 On the day the job offer was confirmed I felt a great mixture of emotions: primarily jubilation, of course; then relief – that the waiting was over, as though this were the answer to a question about Tim’s future that I wasn’t fully aware had been posed; followed by a great upwelling of gratitude for all the people who have played a part in Tim becoming the happy, capable, fun-loving – and, ultimately, employable – young man that he is today. I had a strong mental image of the multitude of small steps that had brought us to this point: the succession of wonderful helpers at home; diets, supplements, treatments; years of therapeutic and educational programs; all his teachers, dedicated aides, and his classmates who kept him engaged and accepted him like family; his NACD program coach, who celebrated every little bit of success with us and kept on “raising the bar” for Tim as he rose to each new challenge; our immediate and extended family; dear friends…. Oh my goodness – the list goes on! It has been an intense and busy time, no doubt about it, and for the majority of those 20 years I wouldn’t have dared assume that this was where we were headed. Still, we’ve had a good deal of fun along the way, and I think that has made all the difference.

The job itself is in a lovely, relaxed-but-busy little Café in Hobart. It started as a Work Placement in Term 2, organised by one of the teachers of Tim’s Work Pathways course at TasTAFE (thank you Noella!). For most of the term Tim did a full day at the Café once a week, which was exhausting for him because he just didn’t stop working all day! These days he does two afternoon shifts, working from 1pm on Wednesdays and Thursdays, which is more manageable. Right from the start they had him doing a wide variety of tasks, from chopping fruit for the fruit salad or preparing muffin pans, to clearing and wiping tables, laying out bacon on trays to be cooked, weighing and shaping biscuit mix, and making and wrapping sandwiches. And right from the start it was clear that this was a perfect fit of a job for Tim on so many levels. 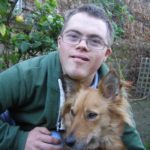 Most importantly, Tess and Tam, the two owners of the Café, are just the kind of people I might have wished for as Tim’s employers. They radiate warmth and a sense of calm even when the Café is in full swing, and welcomed Tim with such wholehearted ease that he instantly felt at home and has been able to “shine” – to show his best self, as it were – from day one. I have marvelled at the way Tess and Tam appreciate all the positives that Tim has to offer, and seem completely unconcerned about his lack of speech or any other factor that could be attributed to his diagnoses. If I make a point of expressing my appreciation for the attitudes that come so naturally to them, they look at me as if I were slightly mad – apparently they can’t see that it could be any other way! Their version of inclusive employment bears no hint of condescension or pity – they, and the whole friendly team of staff at the Café, just “clicked” with Tim, as one person to another – and, I have to ask, can it get any better than that?

When I go to pick up Tim after work these days, I am sometimes treated to comments like “Tim’s awesome!” or “We love Tim”. In fact it was one of these comments from Tess, after Tim had been doing work experience for about a month, that spurred me on to see whether this fabulous work placement could become something more permanent – a job! – for Tim. Not wanting to be the pushy parent – but also not wanting to let a perfect opportunity go to waste – I enlisted the help of specialist employment agency to approach Tess and Tam on Tim’s behalf.

Initially I think this was a little confusing for Tess and Tam; they were already thinking about employing Tim and weren’t sure of the role that an employment agency might play in the scheme of things. To be honest, I wasn’t clear either to begin with, and for a while I was a little afraid that getting more people involved – even if the aim was to ensure that Tim was well supported in the workplace – might be more off-putting than helpful. As soon as the job was confirmed, however, I felt that things would sort themselves out, and they have.

Tess and Tam don’t see that Tim needs a support worker at all to help him do his work, though I did convince Tess that a worker might be able to help Tim with visual lists of his tasks, or give him some visual means of communicating to us at home about his day at work. Tim’s support person still calls in to the Café once a week or so to make sure that everything is okay, but she has learned not to hover around Tim in the kitchen – there is simply not enough space. And apparently she has also learned that he’s allowed, even encouraged, to have a bit of fun while he’s working, which is something I’m sure Tim is pleased about – he can be himself!

On Tim’s first day of paid employment, I brought him in to the Café and stayed for a moment, fussing around as only a loving mother can, making sure that he took his warm tops off so as not to get too hot; asking Tess if she could remind him to have a drink of water occasionally through the afternoon etc. In response, Tess just smiled at me and put a reassuring hand on my shoulder. “Don’t worry,” she said “he’s one of us now.” What a gift! With that, I was able to breathe a sigh of relief and let my grown-up boy get on with his life…

Q.
what other areas of Shout it from the rooftops! are you interested in?